These posts will document the conversion of the Telford project, a church being converted into a single-family residence

What is often the most labor-intensive element in the build process and the one that affects more processes than any other, the structural phase of a project is usually buried in the finished product, the casual viewer having no idea how much work went into making the finishes you see in the end possible. Aside from assuring the general integrity of the building, the early phases determine how flat, level, plumb, square, and strong surfaces are that affect the finished flooring, tile, drywall, cabinets, trim, and more. If the nuts and bolts of a project bore you, hit snooze for a bit!

Reviewing the history of the building, we know that it was built in 1926. Very little records exist for the initial build, but once stripped of its wall and ceiling coverings, the history is fairly easy to interpret. The original main level, the church “sanctuary,” was built with materials common in the Pacific Northwest: Douglas fir dimensional lumber framed the walls, ceiling, floor, and roof. Fir siding cladded the outside, lathe and plaster providing interior wall and ceiling coverings. Somewhere along the line, colored plexiglass had replaced the original glazing in the lead counter-weighted double hung cathedral windows, but the 94-year-old windows were still intact. Shiplap sat beneath the tongue-and-groove finished fir floor. Before plywood, shiplap- (long planks of 3/4″ thick fir) were commonly laid diagonally across walls and floors to brace and stabilize each plane. In modern construction we use plywood in place of shiplap to create shearwalls and roof or floor diaphragms, which unify the structural components to meet building codes designed to protect structures against earthquakes, high winds, and heavy loads. We’ll get into that more later.  Although the structure had certainly moved, relaxed, and settled a bit over the past 90 years, the relative integrity of the place says a lot about the resilience of wood-constructed buildings! 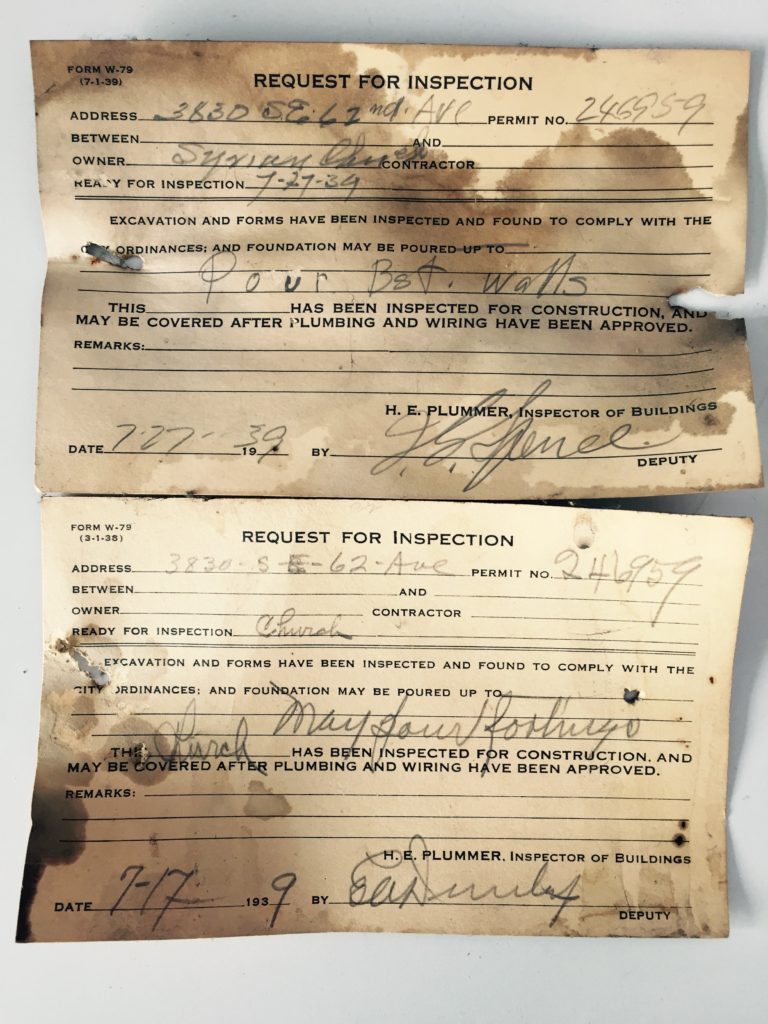 Inspection cards for the 1939 basement foundation walls were discovered inside walls during demo. 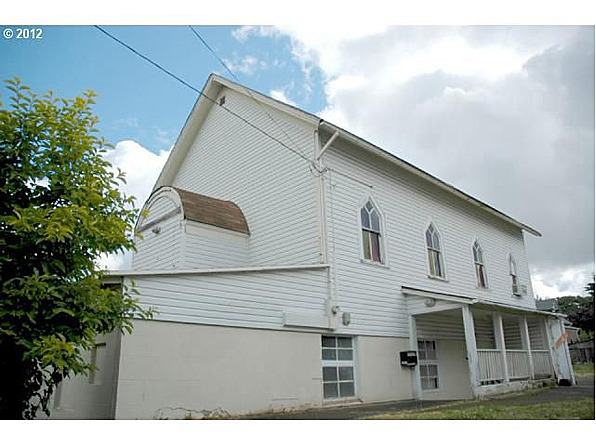 Here the main structure can be seen sitting atop the 1939 foundation wall addition.

In 1939, the church was raised and foundation walls for a larger basement level poured beneath it. At just over 2,000 square feet and halfway below ground level, the new level extended 14 feet beyond the original structure to the north and west, which was covered by an awning-style roof, wrapping around the building in an L shape. The south and east walls of the older main level now sat directly on the new foundation walls, but the north and west walls rested in the middle of the basement ceiling. To support these walls, bigger 2″ x 13″ floor/ceiling joists spanning across the width of the new foundation were sistered along side the original 2″ x 10″ joists, and a large fir beam sat beneath them all, supported by 3 posts and the foundation at its ends.

Lost? Let’s use some illustrations:

The original structure must have looked something like this, but sat at ground level. 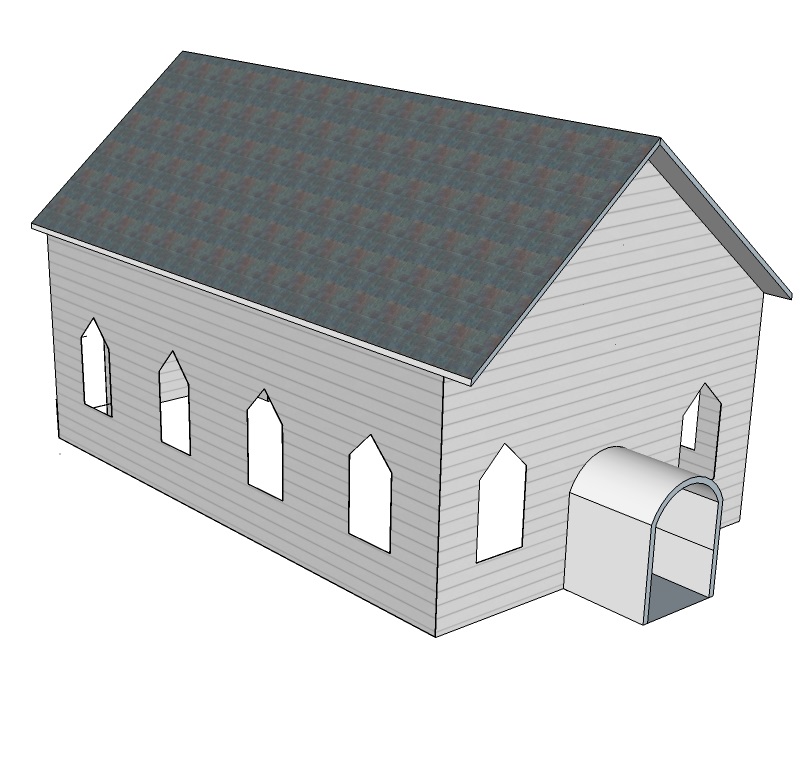 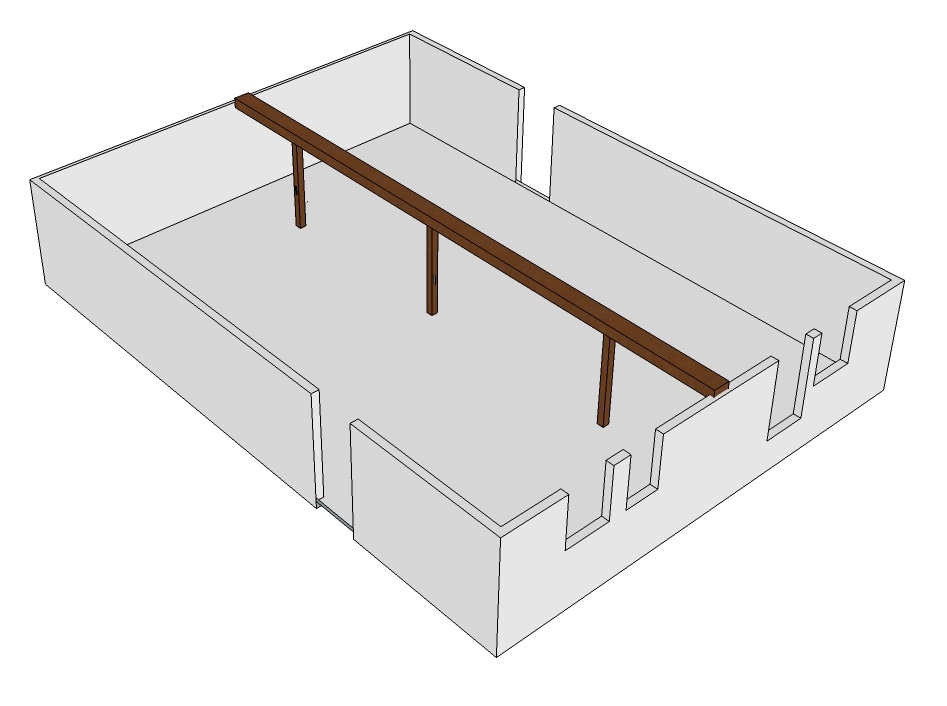 The original 2″ x 10″ floor joists sat atop the new beam. 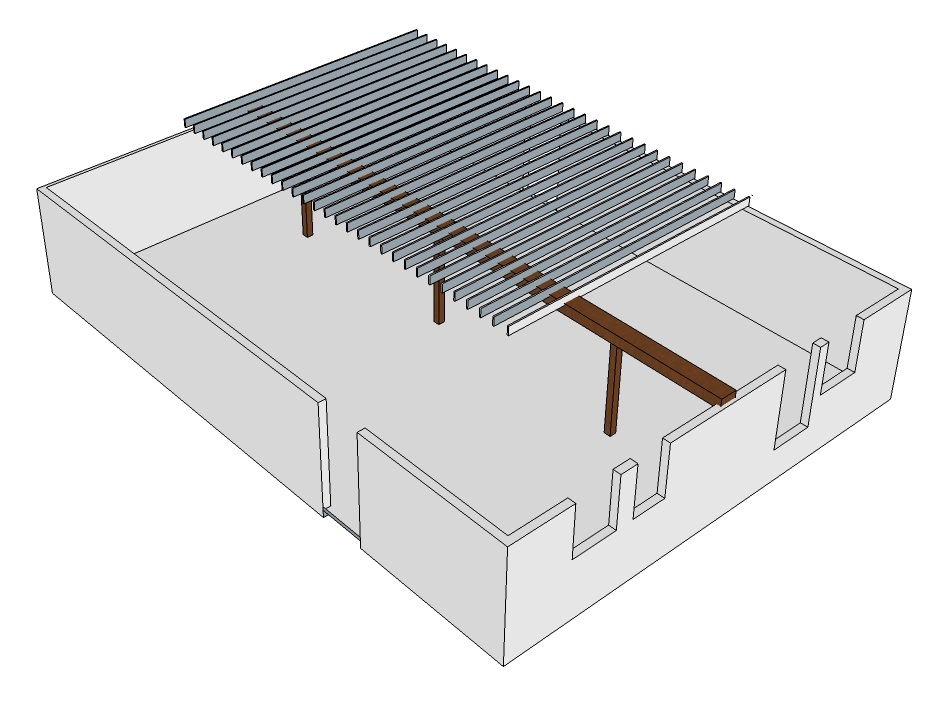 Larger 2″ x 13″ joists were added to complete the span, tying the old structure into the newer lower level. 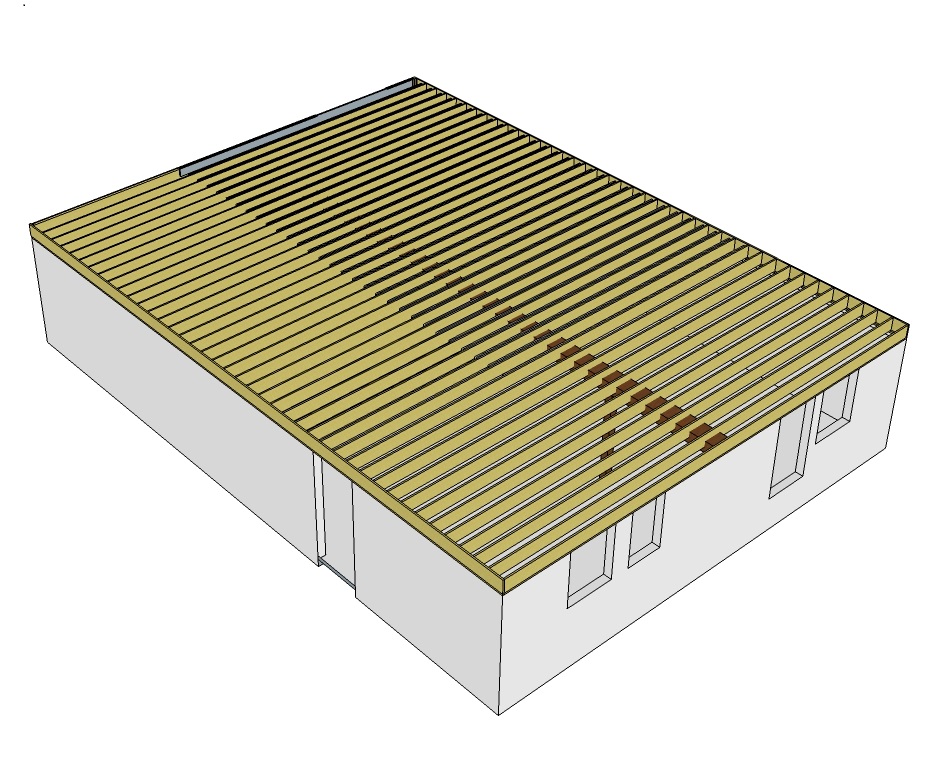 A shed roof was added to cover the extended area of the lower level. Here we see the structure as it sat in 2016 before construction began, the 1920 main level sitting atop the 1939 basement addition with a shed roof wrapping around the north and west. 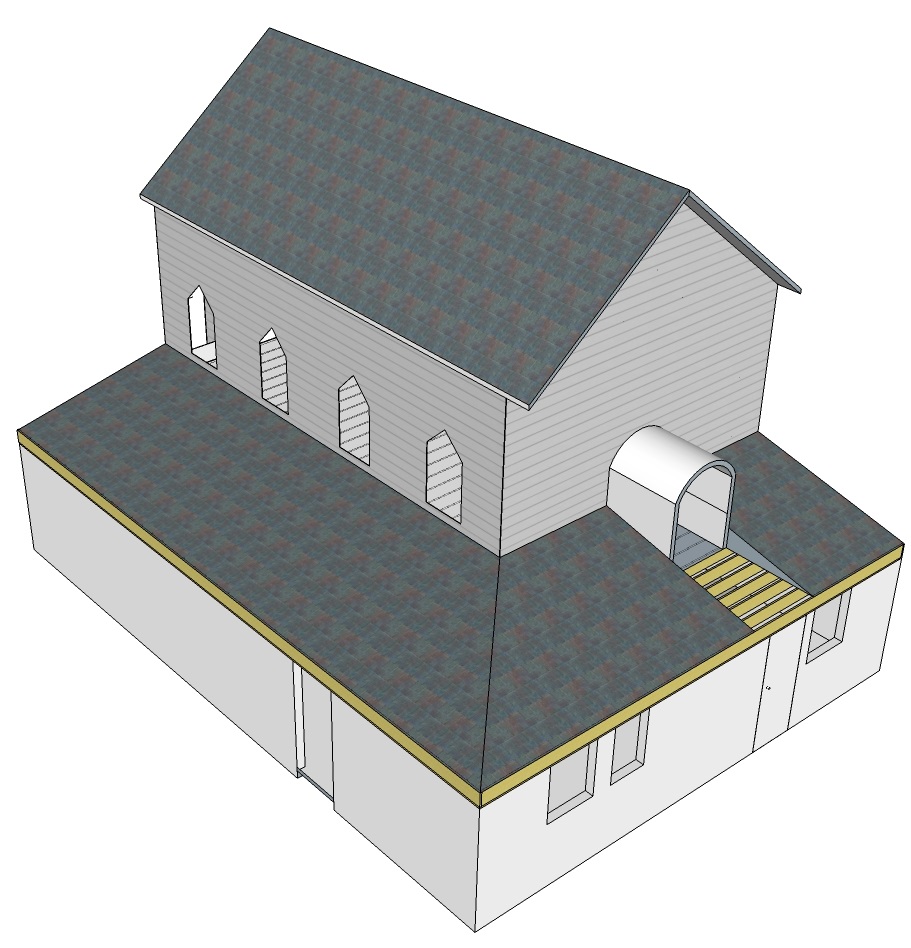 When the structural scope of a project exceeds what can be clearly defined in building codes (what is referred to as a “prescriptive path”), it becomes necessary to hire a structural engineer. The engineers’ job is to ensure that proposed changes to a structure meet national building codes, and specify what type of lumber, nails, and hardware will be used in each detail.

While sometimes we builders do have to mine these documents for answers to problems that arise curing construction, the architects and designers are kind enough to provide the results of these calculations in easy-to-read building plans. 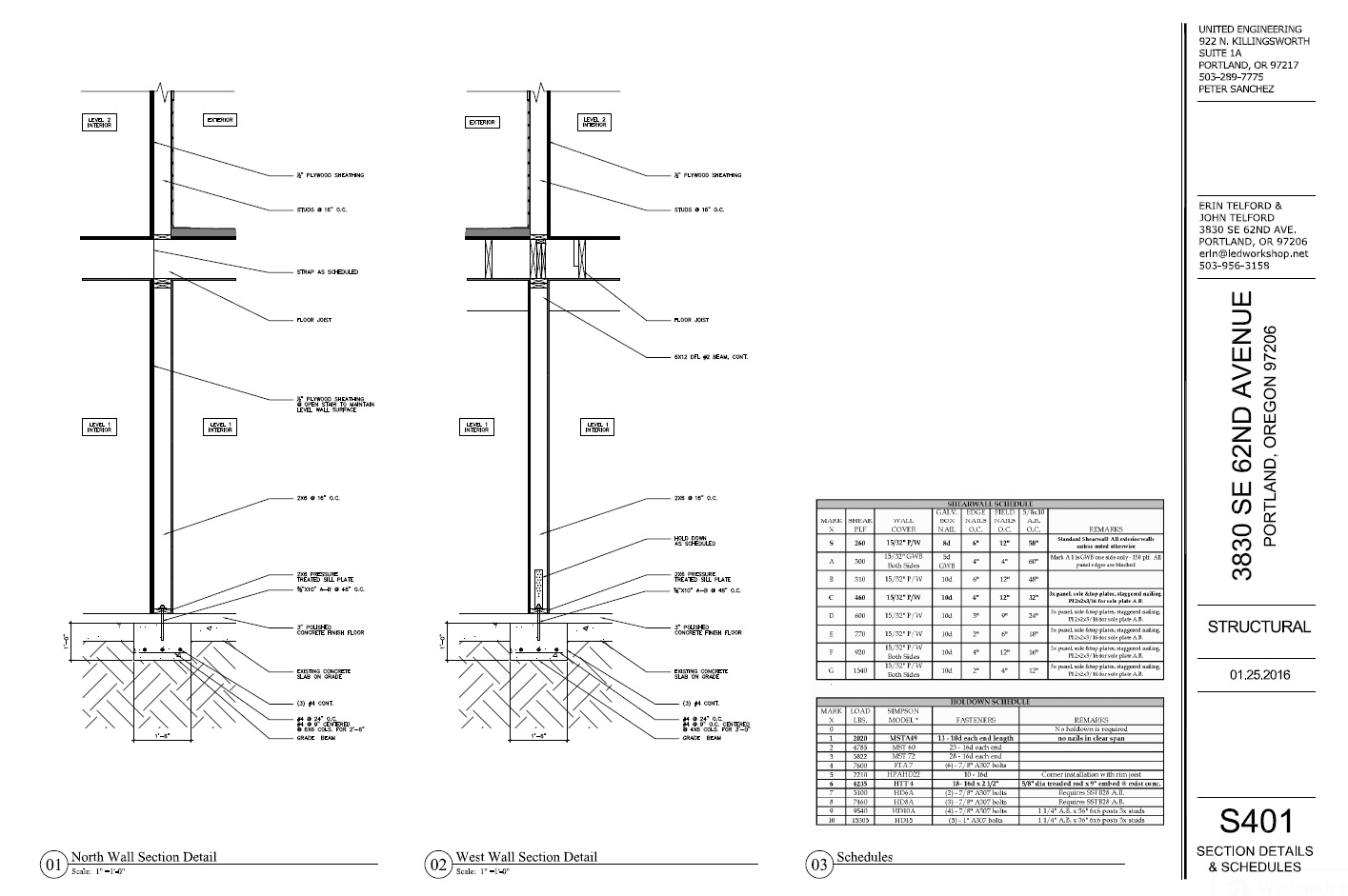 The project design for the COTP will retain most of the prominent features of the church, but some changes triggered a host of structural upgrades. A vaulted ceiling in the main level will require a large ridge beam and beefier rafters to carry the load and stabilize forces that ceiling joists took care of before. The heavier roof and shear panels- designed to keep the structure rigid- will require that window openings get re-framed with headers and king studs that didn’t exist before. Posts and beams transfer the roof’s load paths around window and door openings. The larger loft gets posts and a large beam to allow it to span clear across the main level. Everything gets bolted into concrete to prevent the structure from rattling off of the foundation in an earthquake.

Directly beneath the north and west upper walls will be grade beams- concrete footings designed to spread the pointed loads from above. The longer north wall gets an 18″ wide by 12″ deep continuous footing, and the west wall that one end of the ridge beam sits in gets a 30″ wide and 18″ deep footing. Both are reinforced with grids of steel rebar. Stem walls project above the footings to allow the walls supporting the main level to be built prior to the new slab that will pour in later.

Framing in load-bearing walls is designed in a way that allows weight to be transferred properly to supporting footings or foundation walls. Solid wood or site-built beams called headers move loads above window and door openings onto the adjacent king studs, which continue the load to the foundation or more headers below. The more the load is carrying, the larger the header. The new framing and load paths down to our grade beams are show in the following illustrations. The load path of the ridge beam carrying the upper half of the roof load is shown in red. The load path of the lower half of the roof is shown in green. The loft posts and beam are shown in orange. 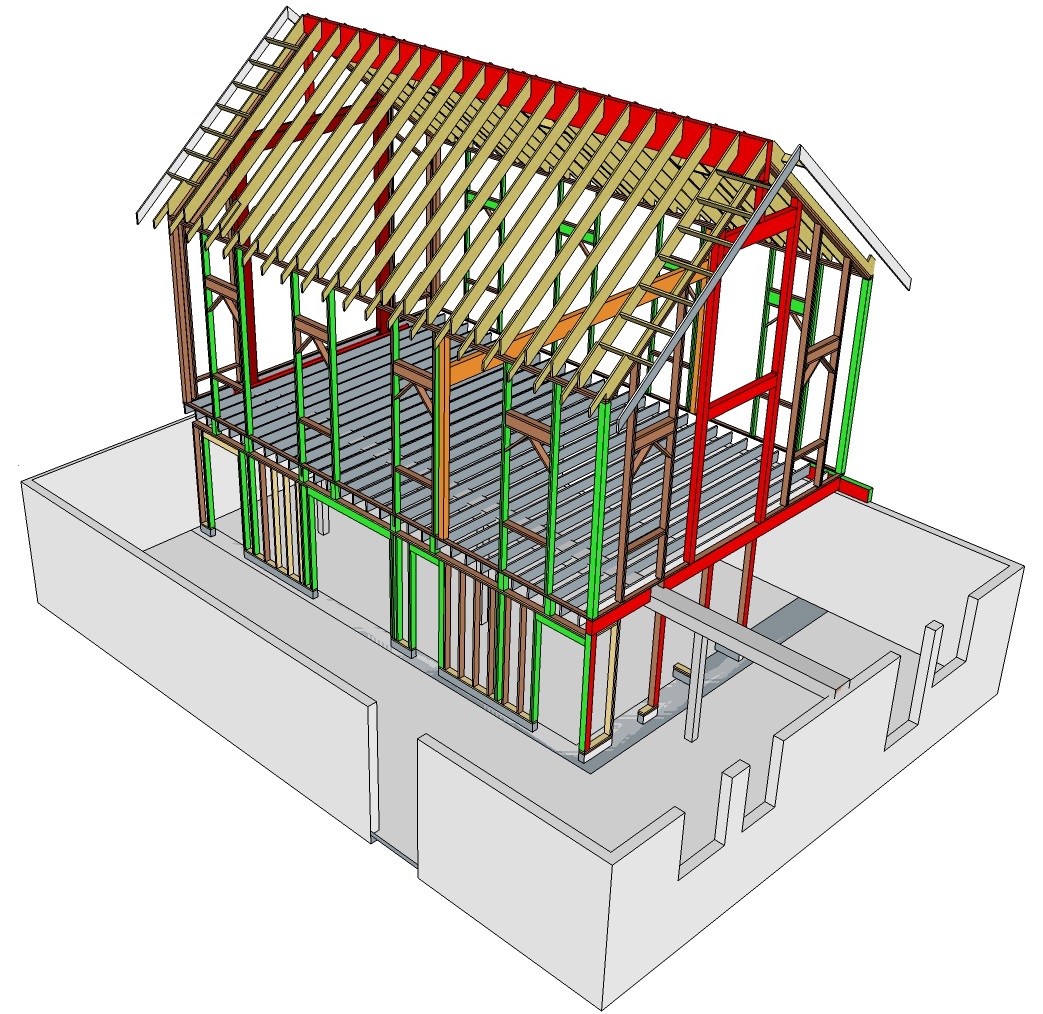 In a typical exterior wall, plywood nailed to the face of the studs locks the studs to each other in shear panels, bracing the wall against lateral movement. The result is a structure that acts as one piece, rather than separate parts. Think of a cardboard shipping box: Without the corners taped together, a box can be flattened easily. Once taped together, the box can be picked up and moved around as one firm object. While we don’t want our structure being picked up and moved around, wind and earthquakes make this a possibility! Attention must be paid to breaks in walls, plates, and corners to make sure that separate panels are tied together, as well as the floor and roof diaphragms. Once unified, the “box” can be bolted down and secured to its foundation. 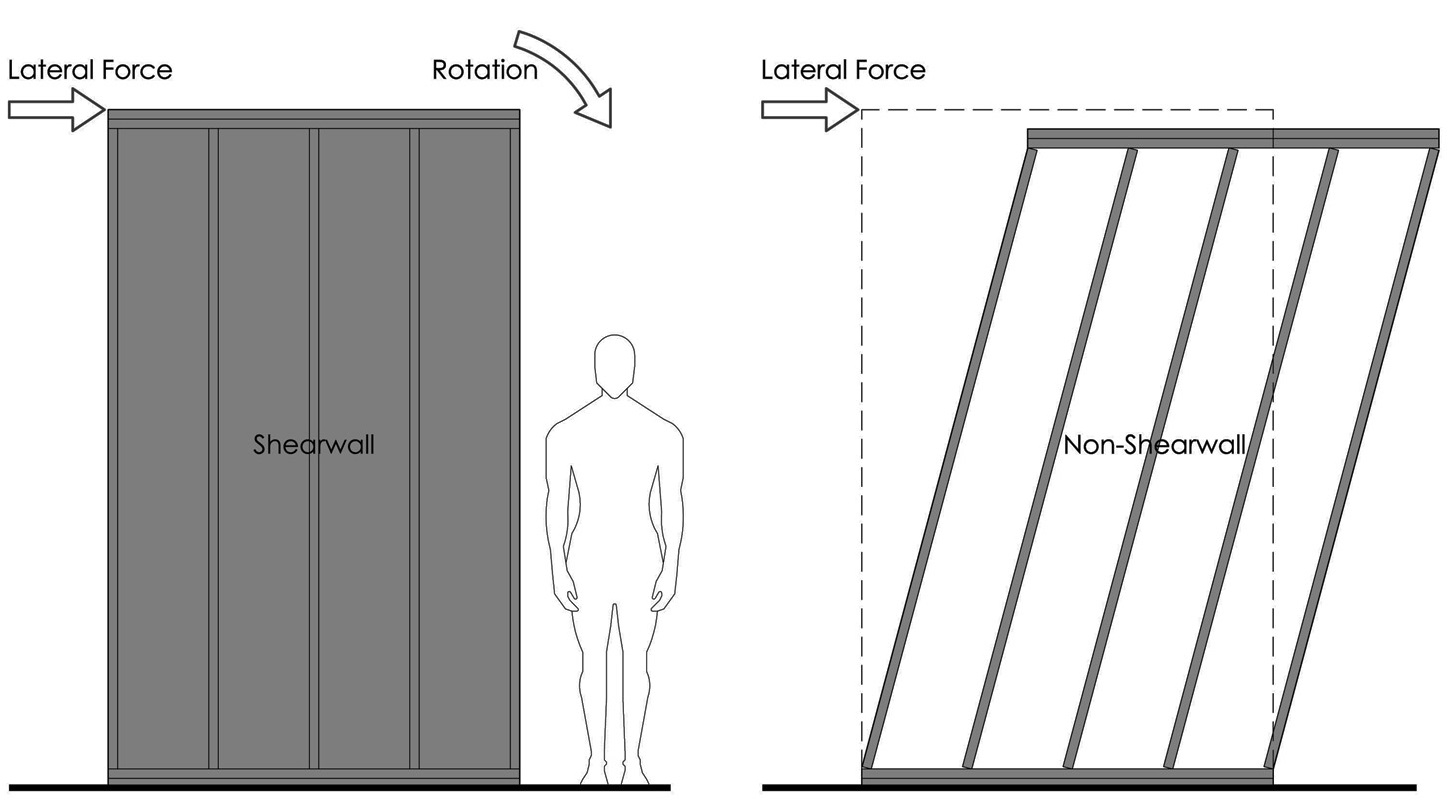 The east wall, already broken up by the small pop-out containing the domed apse, will get two new windows. The result is a wall with almost no shear strength. Without any significant area left in our east wall to brace with plywood, the engineer designed a steel moment frame to provide the rigidity this wall needs, as well as support for the 1,500-pound glulam beam and the weight it bears.

Shown alone on the left, the moment frame sits between the apse and the new window framing. Bolted to the top plates at the top and the foundation at the bottom, the 6″ by 12″ steel columns and beam provide adequate shear for the entire east wall. In the previous illustration above, the moment frame can be seen in dark red. 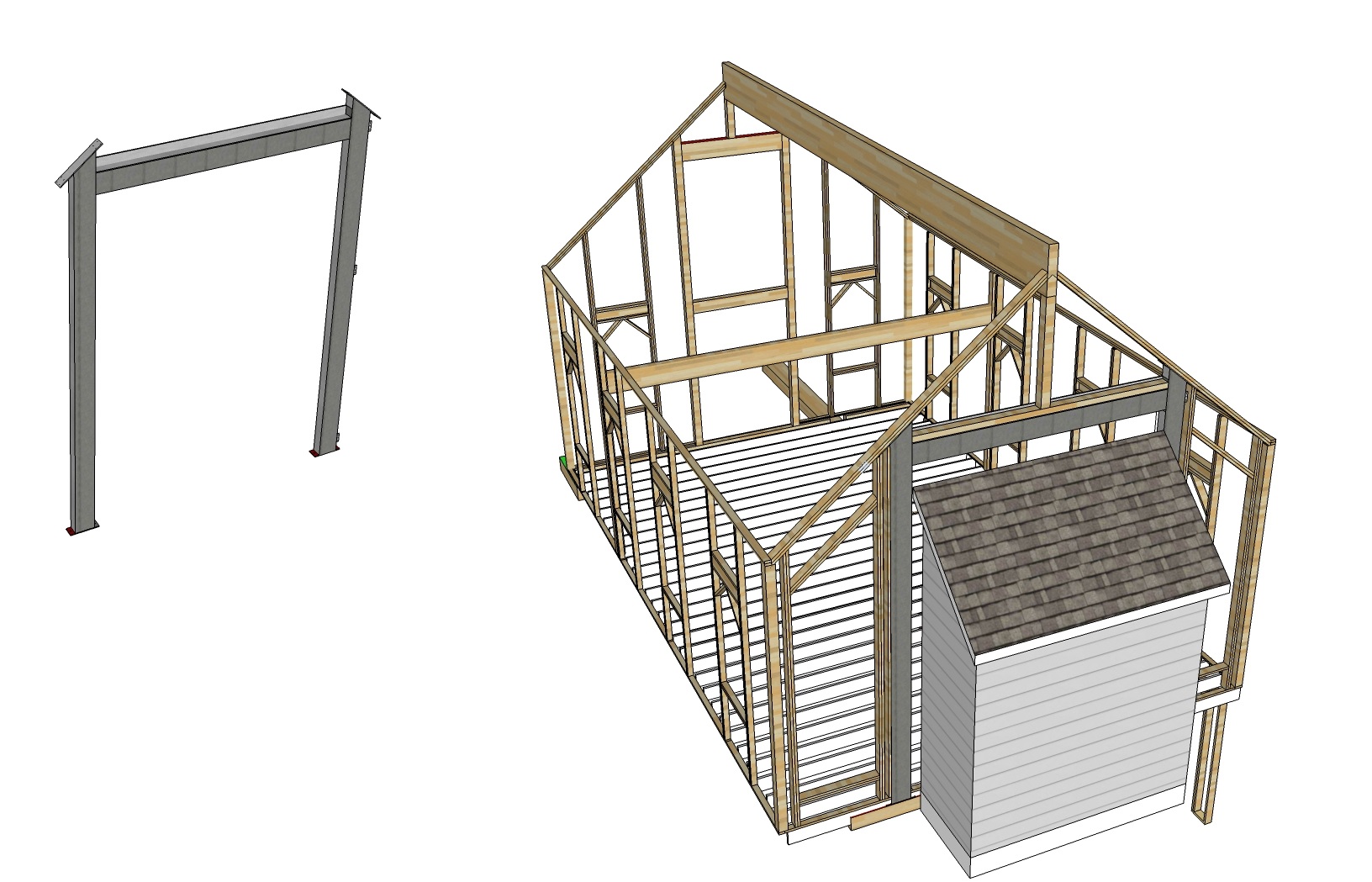 We are often asked about vaulting existing ceilings, and end up having to give a simplified answer to a complicated situation: You either leave the ceiling joists in place or tear the entire roof off and install a ridge beam, rafters large enough to handle the span and insulation requirements, and often new footings to handle the new load paths. Why?

In the first image, downward forces at the ridge will push the tops of the walls outwards. The second image shows the ceiling joists doubling as collar ties, which connect the opposing walls, preventing the forces shown in the first image. The other boards shown provide further support by transferring forces around through triangulation. Without the collar ties, we need some way to prevent these forces. A ridge beam large enough to carry the weight of all of the rafters is used and a post beneath either end prevents any downward movement. Hardware at each connection further secures the roof framing. 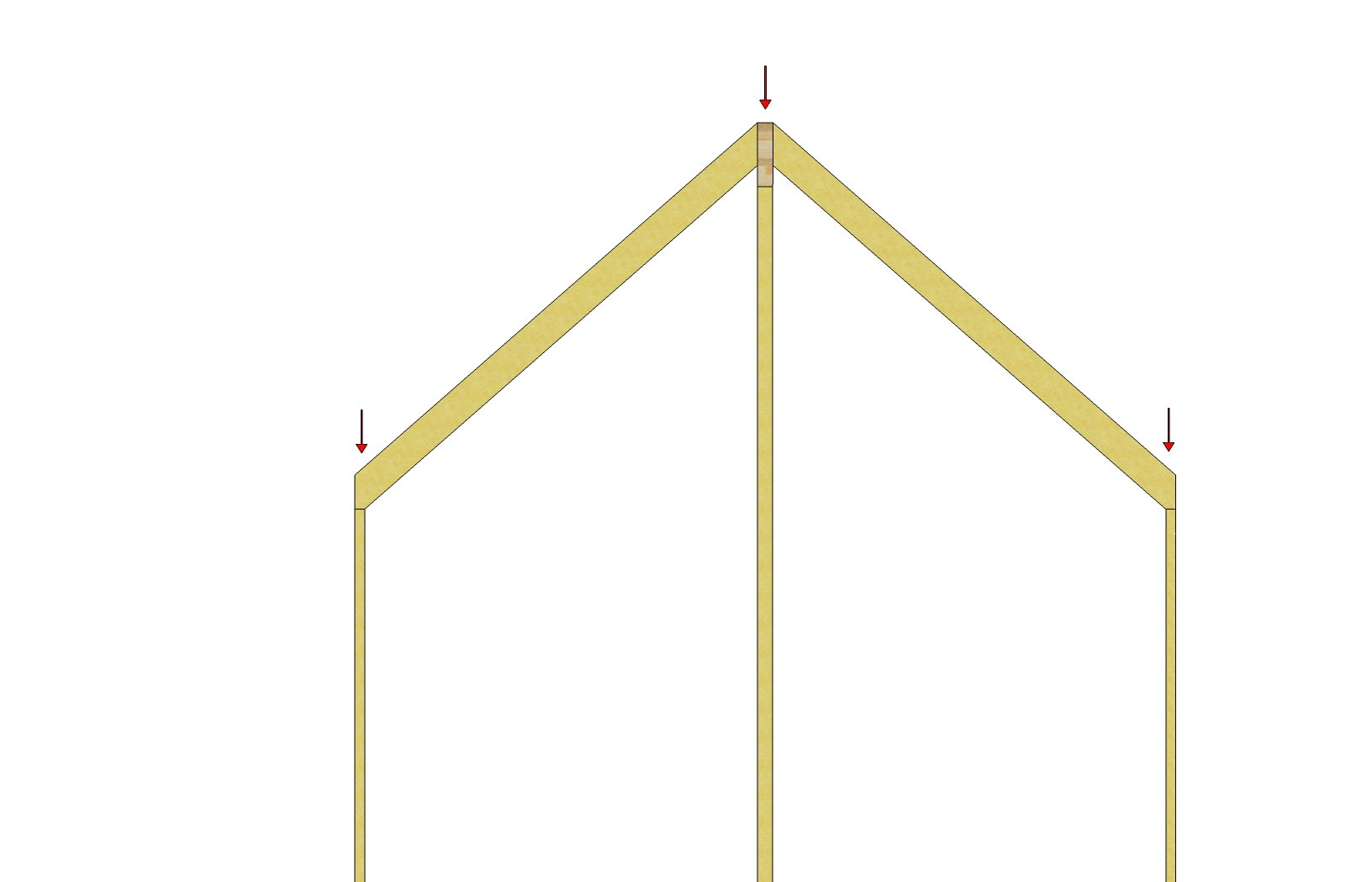 A NEW STRUCTURE BUILT ON THE OLD

The COTP will have thousands of new nails, hundreds of new studs, joists, beams, and posts; dozens of sheets of plywood, yards of new concrete, and some steel. After a lot of lifting, craning, nailing, and even some welding, we’ll still have our original structure, just one that will withstand modern gravity… Ok, so the forces of physics haven’t changed in the past 100 years! Our understanding of what happens in high wind or heavy seismic events has, and so we build for the worst possible scenario. This church may have stood for almost 100 years, but a single earthquake could have ended its history as a standing object.

The structural phase of a project is often the most labor-intensive process, but aside from photos and memories, most of the work disappears into the finished product. Design choices we make for our finishes need to be considered when framing, and so a properly planned project includes as many details for finishes as possible. Stair stringer dimensions depend on the thickness of the finished floor. Window sill heights are set relative to counters, vanities, and other fixtures that won’t be installed until much later phases, but all need to be considered when framing. Some carpenters think of framing as rough enough that things can be “square enough,” plumb enough,” or “level enough,” but as a company who does both framing and finish, we know the value in paying close attention, measuring well, and planning well! Once your building is square, level, and plumb, later phases such as drywall, trim, and cabinets are made considerably easier.

We will further document these building processes in further posts, but our next installation will be design overview. We will give a glimpse into what the finished COTP will look like, as well as talk to the designer about what went into planning this project. Stay tuned!